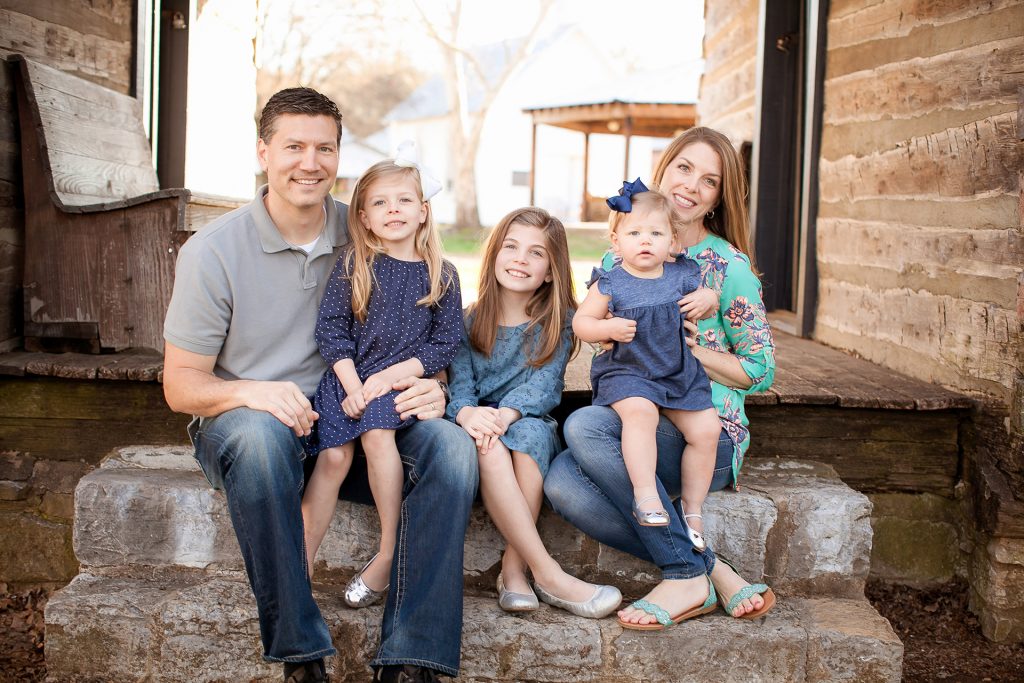 There have been certain moments in my life when I can say I have experienced God’s presence or intervention in a distinct and eye-opening way.  The following account is definitely one of those.

On Monday, December 28th, 2009, my wife, Hilary, had a regularly scheduled ultrasound at thirty-seven weeks of pregnancy with our second child.  Since she had been having frequent ultrasounds as a precaution related to her family history, I had not attended.  During the ultrasound, the technician noticed an abnormality with our baby daughter’s heart and informed the OBGYN.  Her OBGYN then affirmed the nature of the situation and set up another ultrasound with a specialty group to double-confirm the issue.  As you can imagine, this was traumatic and unsettling to Hilary, having gone to this appointment alone and having no reason for concern up this point in her pregnancy.  Based on these ultrasounds, we were informed that there was a noticeable size difference between the chambers of the baby’s heart.  The left side appeared to be much smaller than the right.  We were told that the two chambers of the heart should basically be symmetrical.

At this point, we were immediately referred to Vanderbilt’s Pediatric Cardiology Department.  Vanderbilt is a large medical center in Nashville, TN, with a well-known children’s hospital.  Days later, we went to appointments at Vanderbilt where we saw a Pediatric Cardiologist, a high-risk OB, and a genetic counselor.   These subsequent ultrasounds and specialists again confirmed what was seen in the initial ultrasounds by the technician and specialty group.  The abnormality was noticeably visible to us and my wife’s parents who were present during the ultrasounds.  During one visit, the cardiologist drew a picture to show us exactly what the problem was with our daughter’s heart. 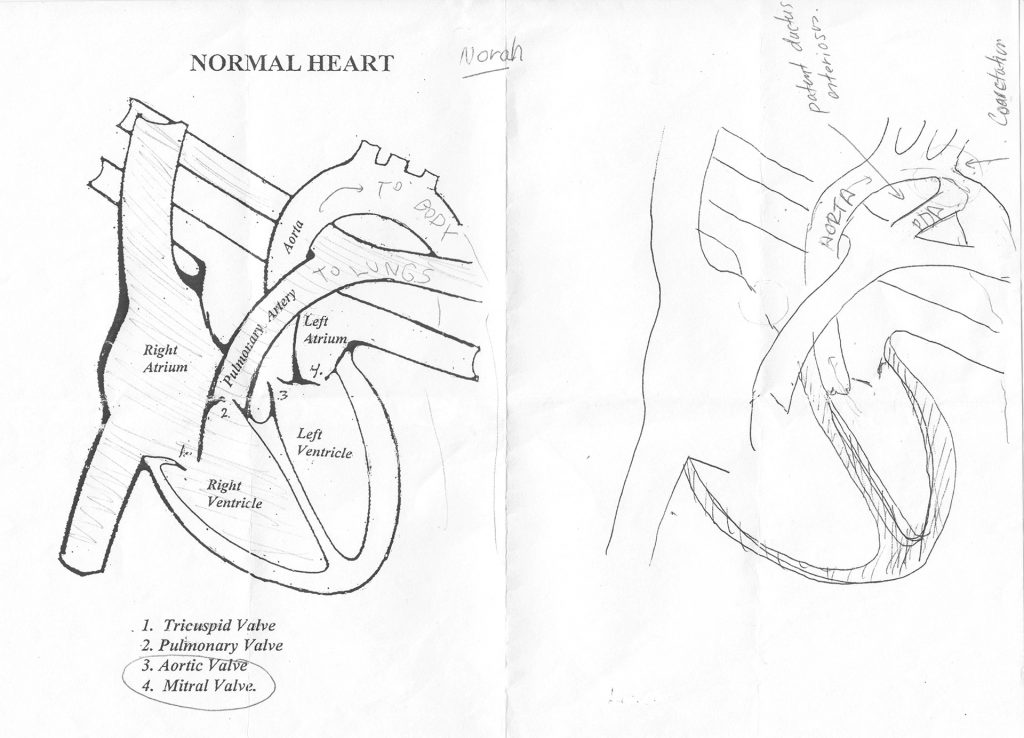 I recall asking the cardiologist if she had dealt with this issue before and she said she saw this condition about every six weeks.

The prognosis was that the baby was going to need a corrective procedure soon after birth due to a condition called Coarctation of the Aorta. The medical explanation we were given of Coarctation is that it is a narrowing of the aorta, the large blood vessel that leaves your heart and delivers oxygen-rich blood to the body.  The doctor told us this was a genetic condition that could unfortunately not self-correct.  We came to the realization that our soon-to-be newborn daughter, Norah, was going to need surgery, likely spending days in the hospital.  With this prognosis, it was then necessary to take a tour of the Neonatal Intensive Care Unit and register for the induction that would occur a few days later.

Of course, on the first day of the troubling ultrasound, we started praying.  That first evening my parents and sister came to our home and we prayed and laid hands on Hilary (Mark 16:18) and asked God for His intervention.  There were also many other family members, church friends and even strangers who began praying and supporting us.

After much prayer by us and many others, we arrived at Vanderbilt hospital on Monday, January 11th, 2010, for Hilary to be induced.  Although we were expecting our daughter to have surgery in the immediate timeframe following her birth, the many prayers lifted up for our situation had given us a peace about it all.

On the evening of her birth, there were many medical personnel (my wife recalls it being fourteen) in the delivery room.  These extra personnel were associated with it being a teaching hospital and were to carefully monitor Norah post-birth.  Other than all the scrutiny of the medical staff, the delivery was actually typical.  After a brief introduction to her family, Norah was put in an infant enclosure on a cart and rolled down the corridor to the Neonatal Intensive Care Unit.  It was an emotional time for our family who walked along with the staff to the NICU, as they tried to sneak a peak at her. 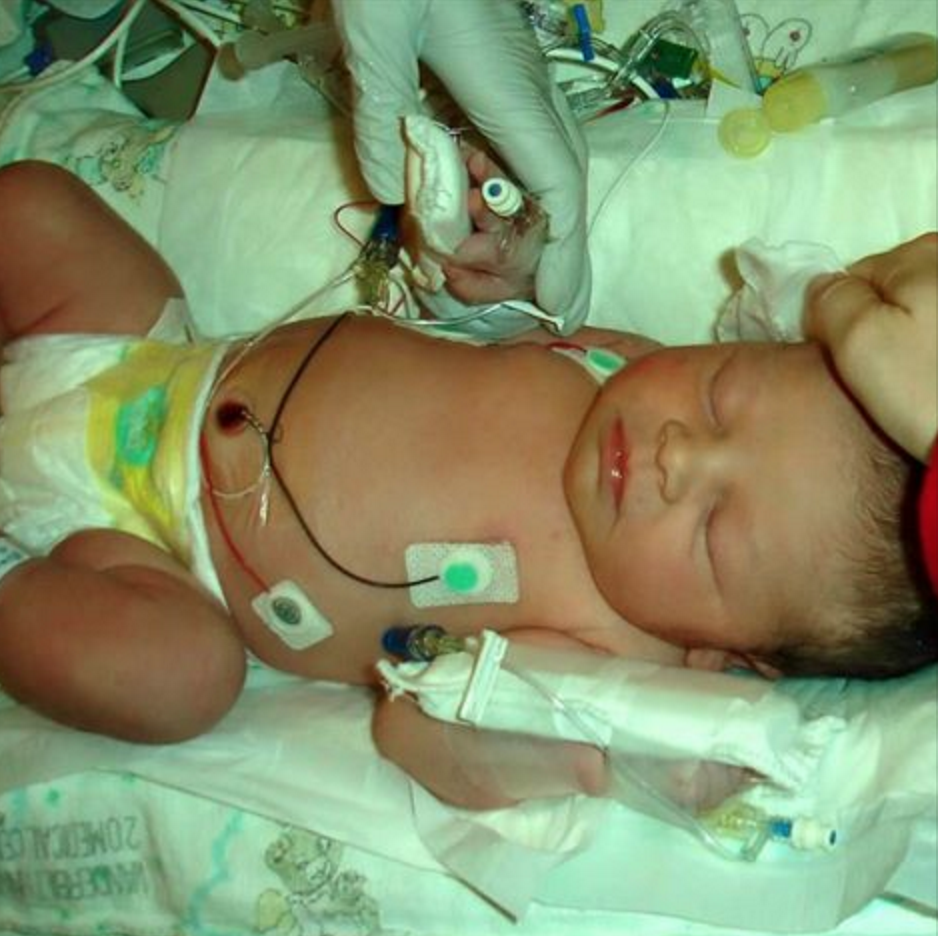 Initially, tests were performed to check the status of her heart, post-birth.  The doctor called and cautiously told us that the tests were revealing that further testing needed to be done before proceeding with surgery.  Evidently, the results were looking better than expected and not showing the same severity of problems that were documented in pre-birth ultrasounds.  This was the first glimpse of good news.  We remember calling both of our parents with a lot of emotion and giving them this good news.

In the following hours, the doctors and staff carefully and continuously monitored her.  In continuing with the original surgery plan, we were asked for authorization to have a PICC line inserted into Norah as a pre-surgery procedure.  It was still troubling to know that our baby would need this kind of procedure, but we were trusting in God and in the credentials of the administrator of the PICC line that Norah was in good hands.  Not soon after we were being asked to give permission for this, the cardiologist called our room and said to hold off on it for now.  Our spirits continued to be lifted.  The timing of this call seemed providential.  We were then informed that we were not going to move forward with surgery.  On January 14th, while some folks in our community of faith were visiting with us, another cardiologist on the team gave us the extraordinary news.  He said we could take our baby home! 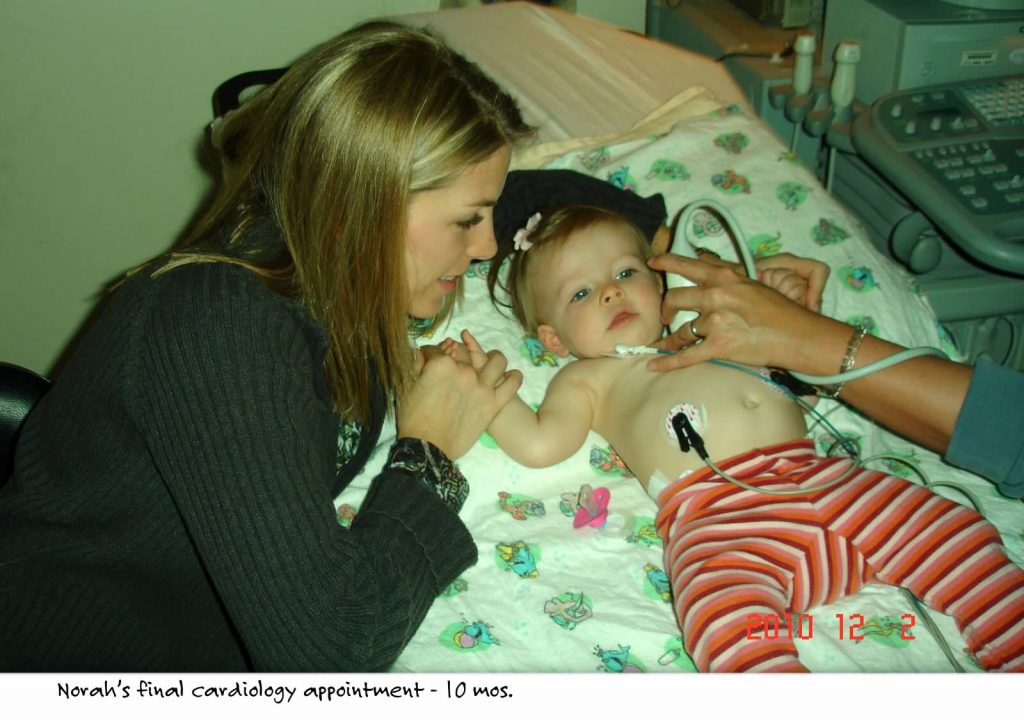 Hilary’s regular OB who had referred us to Vanderbilt had previously told us after we had been given the good news that surgery wouldn’t be needed, “This is a miracle!”  Knowing that physicians don’t tend to use such terminology lightly, we didn’t take it lightly.  In the months following Norah’s birth, we had visits back to the cardiology department to confirm her normal status.  In one of these appointments, we were told that they didn’t understand what happened and that perhaps in fifty years they would understand.  The term they now used to describe Norah’s heart was “perfect” and they wouldn’t need to see her again.

What we do know is that there were several ultrasounds demonstrating the same problem over the course of days leading up to birth.  There were multiple esteemed specialists that concurred with the diagnosis of Norah’s heart.  We, along with family members, could clearly see via ultrasounds the non-symmetrical nature of Norah’s heart, pre-birth.  This was a genetic condition that cardiologists are familiar with and could only be corrected with surgery.  We also know that after prayer, the tests and medical imaging showed that Norah’s heart is perfect (not to mention the obvious health of her cardiovascular system).  She was released after a cardiology exam at ten months old and has never needed additional monitoring or check-ups. 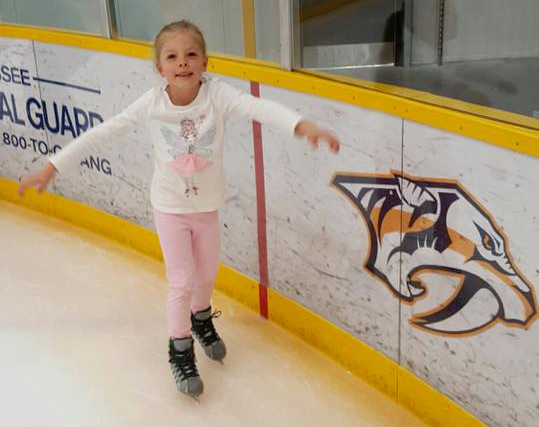 In every way, Norah is a healthy, vibrant, energetic and thriving child.  A common meaning for her name is “light” and she demonstrates that both with her ongoing health and her demeanor.

We have come away from this with profound gratitude for this miracle.  The peace and comfort we experienced throughout the situation really can’t be understood logically (in spite of the uncertainty of the circumstances).  We praise God and give Him the glory for what He has done for Norah and our family.  Jesus instructs us to ask God in His name for help and to have faith that it can happen.  At the same time, God is sovereign and we cannot always comprehend why prayers are answered the way they are.  We serve a living God and hope this story is encouraging in showing that God still listens to our prayers and intervenes in the lives of His children.

Two weeks before the birth of our 4th granddaughter, we came home after a routine day at work.  We received a traumatic call from our son and daughter-in-law about her doctor’s appointment that day.  She said that as a result of a standard ultrasound taken at her OBGYN doctor’s office a malady was detected with the baby’s heart.  She was told that one side of the baby’s heart looked abnormal and that a heart transplant might even be necessary.

When we got the news I felt immediately prompted by the Lord to drive to their house and lay hands on our daughter-in-law, praying for God to intervene in the womb.  I got out my Bible and began to search for scriptures that talk about the womb and healing.  One scripture is, “For you formed my inward parts; you knitted me together in my mother’s womb. I praise you, for I am fearfully and wonderfully made” (Psalm 139: 13).

My wife and I drove to JJ and Hilary’s house and our daughter met us there as well.  As we shared some of those scriptures I remember Hilary said with such simple child-like faith, “I just believe God can do a miracle.”  She had just heard terrible news and yet she chose to totally trust God.

At this point we laid hands on her and began to pray for God to heal the baby in her womb.  We strongly believe that the Holy Spirit leads our lives and helps us in all things, including prayer.  As I prayed for the baby, I said, “Lord, just repair whatever is wrong.”  I had been preparing for a special New Year’s Eve service and the message was how God is a “re”, or “do-it-again” kind of God.  One of the sermon points was how God re-builds our lives, but I had a sub-point that He also repairs things.

Monday, January 11th, the day Norah was born was a long day and night.  Right after she was born, we walked along with the medical staff, as Norah was taken to the Neonatal ICU at Vanderbilt.  When we left the hospital, JJ said “I won’t call you unless it’s good news.”  We were getting ready for bed when the phone rang around midnight.  JJ was quite emotional and said that from the doctor’s initial examination of Norah he was not seeing the same as they had before, on the x-ray.  We immediately were encouraged with hope from the Holy Spirit.  Before I closed my eyes that night, I said to the Lord, “Show those doctors, Lord, what You can do.”

My wife and daughter got to the hospital the next morning.  As they were in the room with JJ and Hilary, the staff requested permission to do the PICC line on Norah, to prepare her for surgery.  Just in time, the doctor called and said to hold off on the PICC line, and she was spared from having to go through that procedure.  Norah was closely examined and observed by the NICU doctors and nurses, and on Wednesday, was released in perfect health.  She is a vibrant, delightful, energetic little girl today.

We will never forget how after prayer, Jesus and His healing power went to her little heart in her mother’s womb and “repaired” it so perfectly.  So many people were praying.  At their church, JJ and Hilary were known as “Norah’s parents” because of all the people who were praying for her. 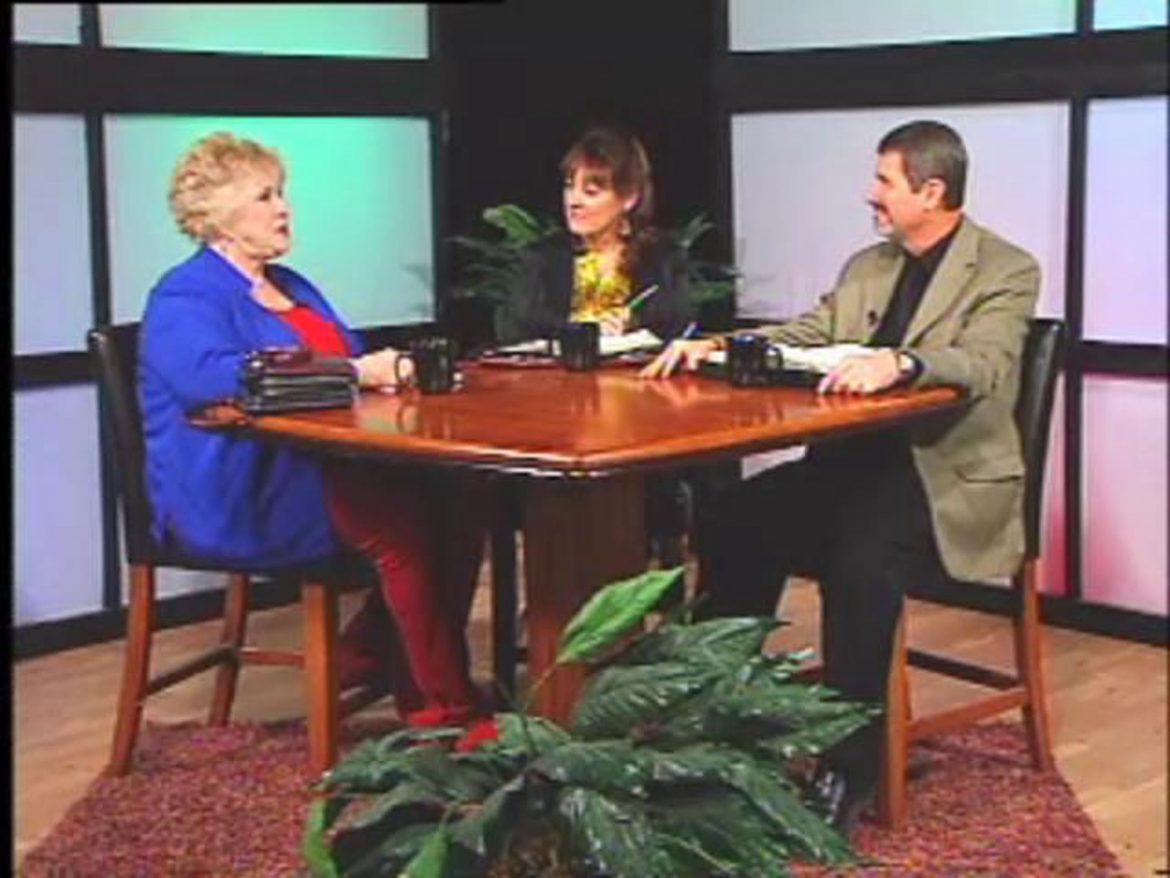 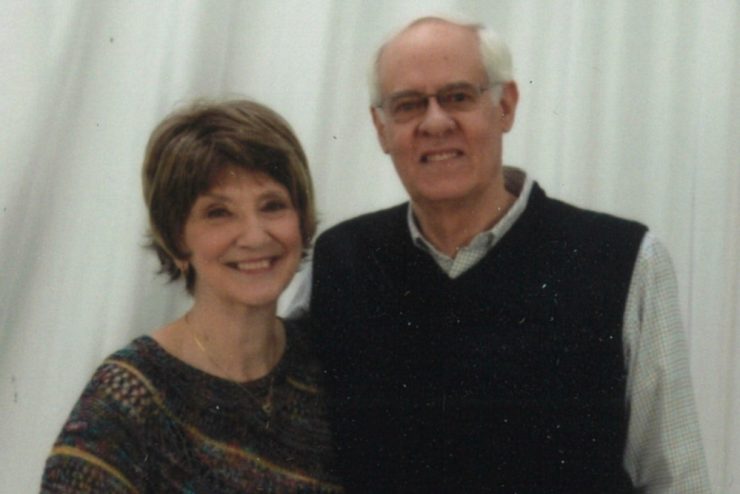 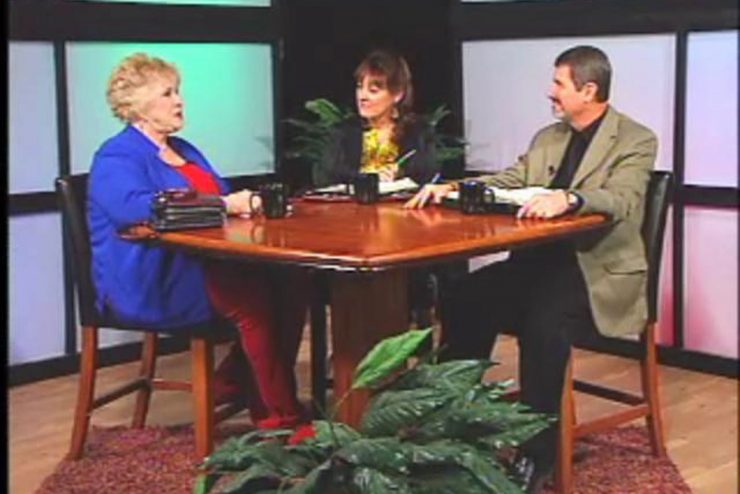