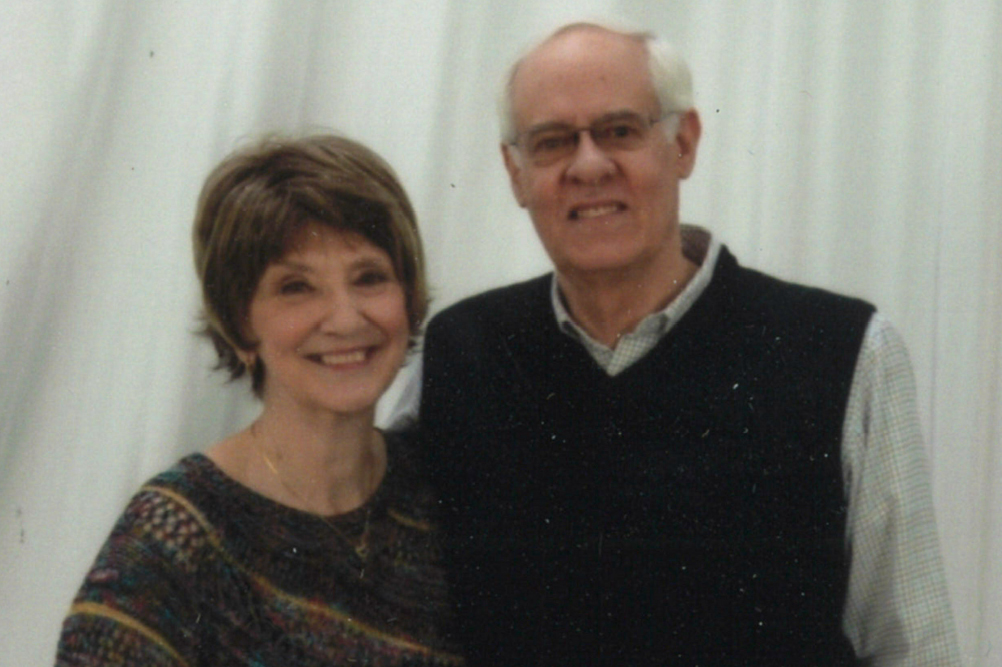 I was born in Rochester and raised in Buffalo, in upstate New York. I had a little bit of a church background as my parents would drop me off at a Lutheran church in the area. I was a once-in-awhile attender. But hearing the stories of the Bible at an early age stuck with me through my life.

As an on-the-road salesman, I went from restaurant to restaurant, making sales calls. The Lord brought Christian radio to my attention. I heard a lot of different evangelists and pastors and I always enjoyed listening to them. Finally one day it all made sense. I will never forget this as long as I live. It was in July of 1970 and I was on Grand Island, New York, the largest fresh water island in the country. After finishing my sales call at the Yacht Club I came out to my car and bowed my head and accepted the Lord. Everything was different after that. That was a great experience!

Radio broadcasting does make a difference. Nobody ever witnessed to me that I remember. It was about a year into my relationship with Jesus before I met another Christian that believed the same way I did. Then it multiplied from there. I began to grow in my faith, but what I had to do was leave my old Lutheran Church and that wasn’t easy to do. 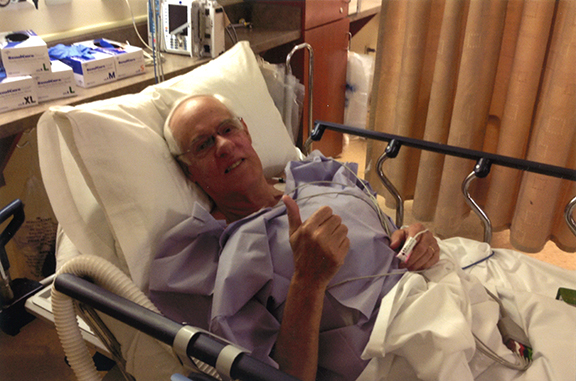 Around 2010 I became sick. I was not feeling well, going to all kinds of doctors trying to find out what was wrong. They came back with they couldn’t find anything wrong with me. That itself was kind of a bummer. When I went to my primary doctor for my yearly physical, he did the usual blood work. When he called me with the results, he told me to get to the emergency room because my kidneys were shutting down!

I proceeded to go to Vanderbilt Hospital and they did every kind of test known to man to find out what was wrong with me. I spent two weeks there. I had lost about 25 to 30 pounds so that was a give away that something was going on.

One day there were 4 or 5 doctors getting together in the hall and then they came in to tell me I had 4 different kinds of cancer! One of them was bone marrow cancer. The others were leukemia, bladder cancer, and kidney cancer. Those were 4 at one time! I was in a fog, in shock. I remembered my dad had passed at age 71 from a brain aneurysm, and my mom was 70 when she died from leukemia. I thought, “Oh boy, I’m next.”

But when I was told that I said to the doctors, “Guess what? I believe in divine healing.” That wasn’t me, that was the Lord speaking, the Holy Spirit. When I said that they didn’t show any expression. That was the beginning of my healing right there. Many friends and pastors came and prayed for me.

That was in March of 2011 and the bone marrow cancer was at stage 4. I don’t remember what they said was my hope for recovery. When you’re in that position, you don’t remember a lot of what’s going on. I don’t think they told me because I think they figured it wasn’t going to be very long. They didn’t want to scare me. I definitely was in shock, when you are told something like that. And checking into what stage 4 means, it is fatal, it’s just a matter of time.

What they did was they gave me a mild form of chemotherapy. I didn’t lose a lot of hair, so I was happy with that. They let me go home, but continued with the chemo. They didn’t make any promise of recovery, but said this is what we can do.

Next they had to take my prostate out because it was so large, before they could work on the kidney. It was causing back up and that kind of stuff, which was not good. Then they had to take the cancer out of the kidney and reconstruct the kidney. When the doctor came in and told me that I wasn’t real pleased to hear that but I said, “It’s major surgery, right Doc?” And he said, “Yes, it is.”

Then they let me go home to recuperate and that took about six months. I remember it was October 21st of that year when I went back to my doctor for a check up. She said, “Mr. Gross, we can’t find any cancer in your body whatsoever!”

Pastors from the church had come in and other people to lay hands on me and pray as I had decided I was going to believe God for my healing. It was non stop. I attribute my healing to the power of God. No doubt in my mind about it! They had said they could only do so much, so I knew it was going to have to be God. It’s an awesome feeling when God touches you. Man can’t do anything, but God can! 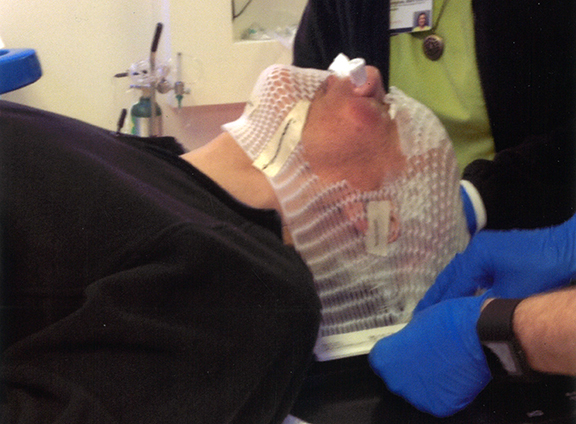 Around 2015, I had skin cancer on my face. I was looking at being carved up with a knife to get rid of it, or go through radiation. I chose radiation. They did a series of around 25 or 26 days of radiation to get rid of it. It doesn’t hurt you, the radiation. It only lasts about 30 seconds and then you come back the following week and do it again. What it does it actually fries your face and it gets raw and you don’t want to go anywhere. And then you get a big ugly scab on it and that takes awhile to heal and come off. The doctor said everything was going good, it looked normal, once it healed up — but it just takes time. 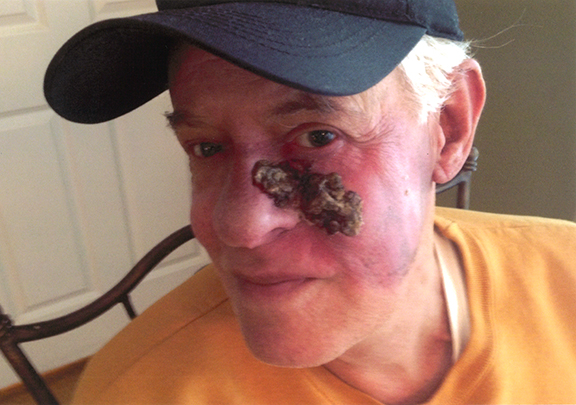 On election day of 2016, the other kidney had a touch of cancer. I was in the hospital and they stuck a long needle in my back. They locate where the cancer is and they freeze it. Then they extract it, whatever broke off, and take it out. They put you semi-under and it doesn’t take very long. The procedure was successful and I was able to go home.

About a month later, on December 22nd, I had an MRI and the doctor told me they found cancer in my liver. That was cancer number 7. The doctor said they couldn’t do anything for me. He said it would be 3 to 6 months and it would be over. This was the week before Christmas and it just devastated me! I was completely bummed out and it felt like a gut punch. Here I had just had the procedure on the kidney that had worked out good and I didn’t have to worry about anything — but that wasn’t the case. But God came to the rescue! The Y’s Guys group laid hands and prayed for me many times and I’m convinced God heard.

One day at the YMCA in Franklin, I was walking down the hallway to go to the locker room. I usually stop at the Bible that’s there in the hallway, to see where it’s open to. That particular day it was opened to John 11:4 and my eyes were drawn directly to the scripture,”When Jesus heard that He said, ‘this sickness is not unto death but for the glory of God that the Son of God might be glorified thereby'”. When I saw that, I think I did three handstands right there! That was God talking to me and telling me that I AM HEALED! It is powerful, and I carry around a copy of that verse.
I knew that it is for me right now. When I read it, I was just charged with the presence of the Holy Spirit. I knew in my spirit that was God talking to me right then through His word! I just knew it.

They had told me I had 3 to 6 months to live. I went back to the doctor and they did those MRI’s again and said the cancer is slowly leaving, it’s not a factor anymore. A month later I went back and they said they were amazed at how it had disappeared. They had no explanation.

That was 2016 and here we are in 2019, and my health today is good. I go back to my primary care doctor and he just shakes his head. The doctors stop short of calling it a miracle. They say, “Good for you, I’m glad you’re feeling better”, some how, some way. It has given me an opportunity to share the Lord with all of these doctors. They will say, “You’re in remission.” I’ll say, “No, I’m not in remission. I’m healed.” They don’t want to hear that.

I’m able to lead a normal life. I can do everything that a 77-year-old man can do. I go to the Y and work out, walk on the track and am just enjoying life. When I have the opportunity I witness to unbelievers. I just enjoy sharing my story with everybody. It’s almost unbelievable. I have to pinch myself sometimes to be able to understand what happened here.

When God speaks, His truth is always there. I will tell you a Scripture He quickened to me when I was in the hospital. I always hang onto this one which is Proverbs 3:5, “Trust in the Lord with all thine heart and lean not to thine own understanding. In all your ways acknowledge Him and He shall direct thy paths.” I have held onto that and it is so true. He will lead us down the path He wants us to go. And then we have heaven at the end.

To anyone facing a similar situation, know that God can be trusted and God can be believed. What He says in His Word is true and we don’t need to listen to satan that says you’re going to die. We have life, eternal life through Jesus Christ and we can believe His healing works all the time. Christ died for our sins and He heals us all the time. We have to have a childlike faith. I have a childlike faith and I just believe that what God says is true, and that’s the end of the story. That’s good enough for me (Psalm 103:1-3, Matthew 9:35, Acts 10:38).

When people hear the “c” word, cancer, there is one thing in our world that seems to go along with it, and that is fear. I’ll be honest with you, I have absolutely no fear. Whenever the doctors would tell me what they told me about cancer, I never lost a night’s sleep. I gave it over to God and He gave me beautiful, wonderful sleep and I never have to worry about anything (II Timothy 1:7).

I know that God can do anything. What is impossible with man, is basically everyday activity with God (Luke 1:37). Another verse is God’s promise that with long life I will satisfy you (Psalm 91:16). We have a purpose on this earth and as long as He gives me breath and strength, I will shout His praises. 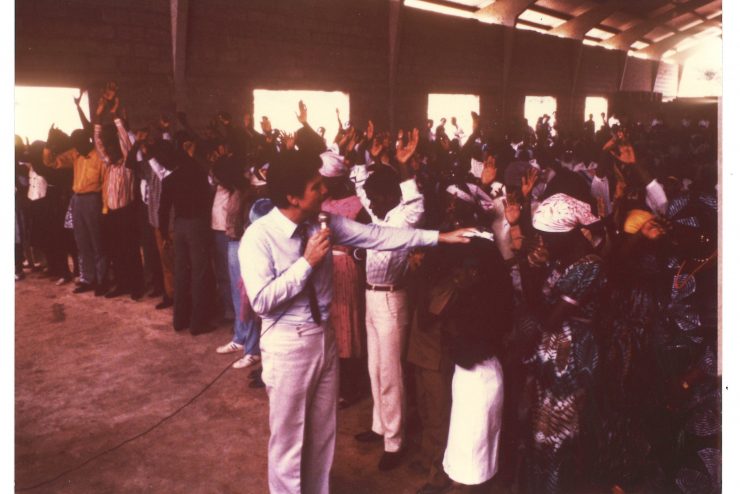 What do you think? Cancel Reply